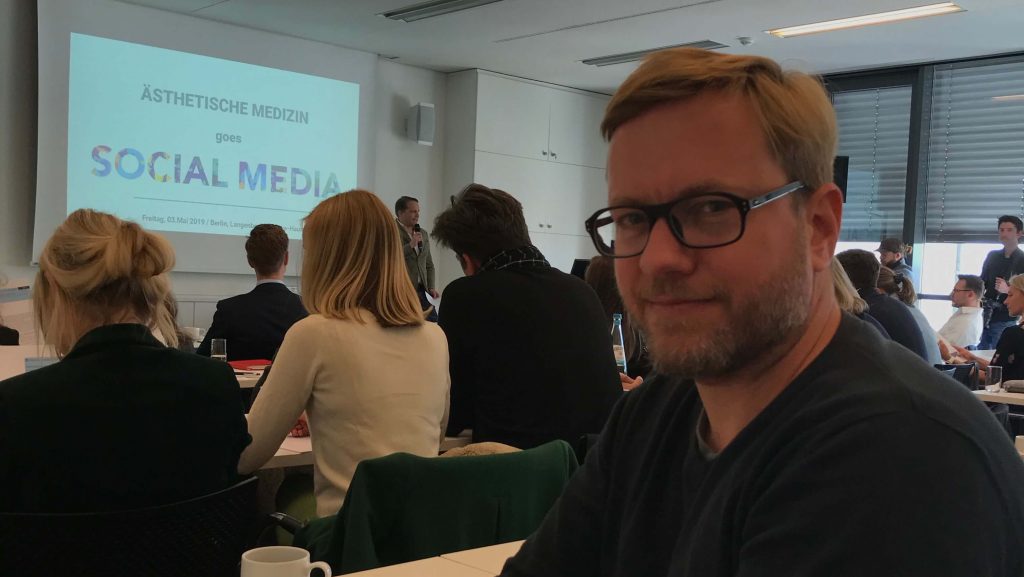 It was full up at the Langenbeck Virchow House in Berlin. Some of the more than 100 guests had to stand to attend the Congress Aesthetic Medicine Goes Social Media. In the lobby on the last floor it was already exciting before the start. For example, I happened to hear a representative of the Medical Association complaining about today’s generation of doctors. They would change clinics far too often, like itinerant doctors. From small talk but back to the topic! Under the patronage of DGPRAEC, the aim today was “to make an important contribution to clarifying many open questions in connection with the use of social media in medicine”. In issue 3/2018 of the journal Plastische Chirurgie Prof. Giunta, President of DGPRAEC, wrote that a guideline for social media should be worked out with the members. This is to prevent “…unfortunately mostly purely commercial – interests from being placed above those of a community of values such as ours…”.

VALUES OF THE COMMUNITY OF PLASTIC AND AESTHETIC SURGEONS

Do we have a community of values? At least there was no discussion about a guideline or the values of our community in connection with social media during the congress. On the contrary, most colleagues listened with great concentration in order to perhaps be able to push their own practice a little with their knowledge. They probably had commercial interests. Due to the excellent presentations by marketing professionals, the congress was very well suited for this purpose. Too bad we didn’t get past that. I had hoped that we would position ourselves a little as Plastic and Aesthetic Surgeons. According to Lisa Heinrich (Social Media Professional), for a marketing expert a social media appearance can already mean two hours of work a day, five days a week. In this context I asked Prof. Giunta how we want to counter the marketing pressure as a community. He couldn’t tell me how to run my practice was his answer. Well, I don’t have a practice. An open discussion did not seem to be desirable.

The picture of an Instagram article was then shown as a negative example for the use of social media. On this pic one saw two resected labia minora, spread legs and in the middle an Emoji. That Emoji looked very similar to the responsible colleague. So this has gone too far. A line’s been crossed. But crossing the border had no consequences. There still seem to be no moral boundaries. The funniest part: This colleague also sat in the auditorium quite amused. Personally, I found the situation somewhat bizarre.

We could work together on how we want to work as Plastic and Aesthetic Surgeons in the future. Then we have a good chance to shape it the way we want and not as other interest groups would like it to. The President of the Congress, Dr. Sixtus Allert, has indicated it in the Congress announcement: “Social media play an increasingly important role in medicine. Our communication seems to be simpler and less complicated, our networks are growing, we have the opportunity to discuss cases with pictures in the shortest possible time”. The possibilities go far beyond the discussion of pictures. With software ideas such as loomio or Slack, for example, you can communicate excellently online in large groups without having to meet constantly. We should make clear to ourselves which tools we use and which ones occupy us unnecessarily. If we work this out together, perhaps a community will emerge. Then we can act as a group with common goals. The theory that we should communicate as social beings and develop in a community is not so new:

“The political and social problem of the 20th century is to catch up with the technical progress of the 19th. This demand of the time is made more difficult by the fact that the development of technology without pause continues to take place at a faster pace than the development of mankind. This danger can be averted either by slowing down technological progress or by accelerating social progress. Otherwise she’ll lose her balance and overturn.”

This site uses Akismet to reduce spam. Learn how your comment data is processed.