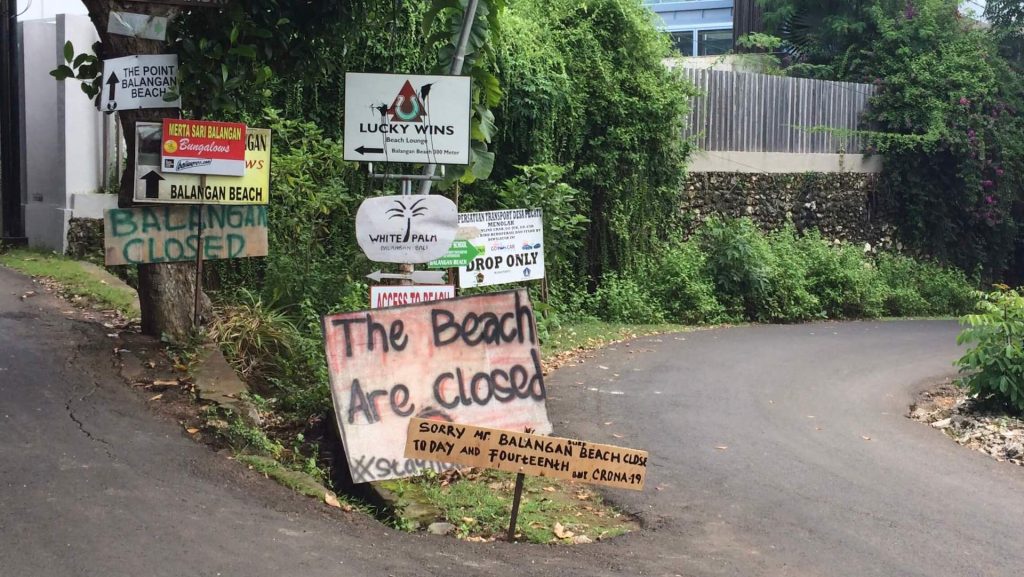 AND THEN EVERYTHING CHANGED…

When I quit my job in mid-2019, there were many reasons for this step. These included refueling and stop body degeneration as a result of overworking, too little exercise and poor nutrition. Moreover the prospect of a reset of life in general was another important reason. Then the reset year 2020 came and the meaning of reset became another one. Suddenly it came to events that nobody has seen coming. As a consequence the whole world was on pause, not only me. Why not take advantage of this time, perhaps for self-management?

As announced I wanted to break new ground in plastic and aesthetic surgery, maybe even outside of it. Clever people in other countries should help me with that. I wanted to see the action of work in flat hierarchies. Thus clarifying my own picture of how this can be done. The goal was to have more fun and more independence in my profession. Furthermore I wanted to see if the financial responsibility of a company could be divided among several people (co-budgeting). This is to distribute the financial risk as an entrepreneur among several team members. Super interesting was and still is how we Plastic and Aesthetic Surgeons could start to push digitalization. At the same time I am interested in how health workers could manage not to let others tell them how to do their job. As an example I see the stereotype of the evil manager looking at his numbers only.

I SUDDENLY HAD SOME PROBLEMS

1. travelling to visit clever people, to learn from them had become impossible. Everything still is only possible online in the www (digitalization is progressing => very good).
2. smart ideas are not very popular, because most people, especially those whose economic existence is threatened, are in panic mode. “flat hierarchies, slack what? Cut the bullshit, I have to save my ass here”. Or as the philosopher Richard David Precht says in the Thilo Jung interview: “The fire has to be extinguished first before talking about prevention.”
3. I am so surprised almost daily by what happens (restriction of basic rights, war rhetoric, virologists soon in the jungle camp?) that I first have to analyze what all this means for me and my environment.

So I am in the process of sorting out my thoughts first to understand what is happening. At the same time I will decide what to do with the time of my planned lockdown. Orientation is not so easy with the incredible amount of information that is coming your way. By the way, it’s terrible when you realize that you’ve been looking for information on your smartphone for an hour and then realize that you’re not really smarter than before.

First of all, many people who are ill with a virus, especially the elderly and those with secondary illnesses, are pushing some of the world’s health systems to their limits. As a result in some places people are dying who would not otherwise have died. With the right personnel and material resources they would still live. Incidentally, this is very traumatic for the health workers treating them. They know that it is completely unnecessary, at least in the rich countries, where hospitals did not get adequate funding before the crisis. I worked with a constant bad conscience on an intensive care unit as a beginner (I had to) because I always thought that patients might die because I was so inexperienced.

DOES IT HAVE TO BE THAT WAY?

As Michael Schmedt, the deputy editor-in-chief of a current issue of the Ärzteblatt Newsletter writes, there was a pandemic simulation in 2013. This gave rise to an urgent warning that a virus pandemic such as the SARS-CoV-2 pandemic now could cause the world to be terrified. The simulation predicted 7.5 million deaths in Germany in three years. At that time, members of the Bundestag and ministries were presented with this printed matter.
Bill Gates warned us of exactly this in a TEDx event.
He was and is perhaps also interested in selling vaccines. Who knows?

The warnings of 2013 and those of Bill Gates have not led to pandemic preparedness in many countries. Money should have been raised. The question is probably how much money we, as a society, want to put into our hands to prepare for such an emergency.

Anyway the figures for recent decades show what everyone actually knows. The work of the health professionals has become more and more concentrated. The health system is close to its capacity limit. In countries like Italy, as we can see, the capacity limit has been exceeded. In order to avoid Italian conditions in Germany in the storm of the corona pandemic, many operations had to be postponed. Intensive care beds were kept free. This in turn has extremely negative economic consequences for the hospitals. As a result here is a lack of patients, especially those who bring in a lot of money according to the DRG system (Diagnosis Related Groups, billing system in German hospitals).

My internal medicine colleagues and those who work in intensive care units are currently telling me that due to the preparations for the COVID-19 patients “there is rather little to do”. That is reassuring. Unfortunately there will be the bill for this later. The health care system in Germany is like a modern truck that is constantly driven in the red speed range and is driven by a truck driver who takes too few breaks. So that would be the problem pandemic. The solution is a health policy solution.

In addition a presentation from the book “Heal Your Hospital“:
Health professionals had rather little financial support in Germany in the last years. “From 1991 to 2012 the number of beds in Germany fell by almost 25 percent, from 665,565 to 501,475 beds. In contrast, the number of inpatient treatment cases rose by more than 25 percent from 14.6 to 18.6 million in the same period. This increase was possible with fewer beds due to a lower average length of stay of 7.6 days in 2012, compared to 14 days in 1991. Statistisches Bundesamt, 2014. However today, many more outpatient operations are performed and the average length of stay of 14 days was perhaps a little too long (due to daily nursing rates).

BUT THERE IS YET ANOTHER, BIGGER SYSTEM STRUGGLING

Dirk Müller, Mr. Dax, describes in his various YouTube contributions an economic and financial crisis that can be distinguished from the pandemic. “Corona”, says one of his guests in this context, is not “like a straw, but like a tree trunk that broke the camel’s back.”
The deficiencies of the economic and financial system were already visible before the Corona pandemic. SARS-CoV-2 is therefore not the reason why the economy is going downhill, but rather an accelerant. Thus causing the global financial and economic system to burn even more fiercely. If hairdressers cannot work and go bankrupt after three months, it is only partly due to the small virus. The hairdresser was not able to accumulate money for bad times. Only those who have made provisions and the wealthy have no problems at the moment. They will probably emerge as winners, as in past crises. Amazon is doing well at the moment. The local retailer has big problems.

IF THE ECONOMY OR THE STATE WERE HEALTHY, THE FOLLOWING WOULD BE THE CASE FOR THE HAIRDRESSER

1. she would earn so much in her 9-hour day that shef can or must build up reserves. Many people cannot do that any more, especially with today’s rent level.
2. she would have the possibility to take out a fair loan to survive the crisis.
3. she would have colleagues or partners with whom she shares the entrepreneurial risk. Or there would be a cooperative that would make it possible to spread all the disadvantages arising from the crisis on as many shoulders as possible. Everyone, including the employees if necessary, would tighten their belts together.
4 Or there would be sufficient state aid to enable them to survive in their jobs.
5. are there still some nice alternatives? Write me via the contact form!

Many argue that one cannot prepare for such a crisis and that natural selection is the consequence. In the course of time, companies that are not viable (e.g. Vapiano and Esprit in Germany) are sorted out. However I have also heard that nature is taking revenge and that the problem of overpopulation is being solved by such pandemics. Be that as it may, it is at least conceivable to me that a well-functioning community of values can survive such a crisis better than an individual who is then dependent on the welfare state. Such communities of values can also exist professionally. I have a picture in mind that I cannot yet put into words so well. To my knowledge, there is no comparable project in medical practices in Germany.

ON THE WAY TO THE WORKPLACE OF THE FUTURE.

What is certain, however, is that working without a pyramid structure in flat hierarchies based on competence demands even more from the individual. This means that you have to be able to rely on yourself and your colleagues. Therefore if someone is unreliable,  the team members struggle. Likewise, if someone is not able to criticize properly and criticizes only to let out his frustration, there is no way forward. In conclusion this type of person would perhaps be better off with a boss.

Consequently the first chapters of books about New Work are full of self-management strategies. First of all you should know yourself well enough to fit well into a self-organized team later on. Roughly speaking, the team cannot take over the role of a psychotherapist in order to understand why, for example, a single person always causes problems. So you first have to make yourself fit for such forms of organisation. Only when you know how to deal constructively with yourself and others can you function properly in a team. Or else you find out that you are not in the right place and leave the team.

In the course of many conversations with members of Enspiral, among others John Gieryn and Sandra Chemin, one thing became clear to me. I first have to see what my suitability is for working in flat hierarchies. Am I even doing what is right for me? What are the next steps that make sense? Am I ready for this? The whole thing is very interesting, because in the packed everyday life of a Plastic and Aesthetic Surgeon you never have time for such self-management training. However, now I have the time! Coaching offers are a dime a dozen. I was interested in it and wanted to make myself fit for the future of work. When I was looking for something like a coach or consultant to make me fit for New Work, the following qualifications were important to me:

1. First of all I wanted an experienced person who not only talks but also has a track record in this field.
2. the coach’s basic attitude should be a humanistic, social and not an economically fixed basic attitude aiming to maximise profit.
3. the consultant should of course be convinced of all these methods of New Work, future of work, Microsolidarity, teal, self-management, etc. He or she should already have initiated such forms of organisation.

I have decided on futureyou.be and the journey begins.

“Our mission is to empower you to live a meaningful and thriving life by designing and developing the work that makes it possible” Sandra Chemin, futureyou.be

In the meantime, I’m listening to the very nice podcast about new working models in health care A Cup of Teal by Helen Sanderson.

This site uses Akismet to reduce spam. Learn how your comment data is processed.